Throwing a sacred ball through the ring (nem con)

Each ethnic group in Vietnam has unique ways of celebrating Tet. The Tay people of Cao Bang and Lang Son Provinces have a special Tet game that not only ushers in the spring but also serves as a matchmaker.

According to Tay legend, Pia, an orphan, war poor and lonely. Discouraged with life, he went to the forest and gathered pieces of fruit to throw around. One time, he threw a fruit so hard it flew straight to heaven, where a fairy caught it. The fairy flew down to the earth to play with Pia. Before long, they fell in love and became husband and wife.

The people of the mountain village believed that the fruit had brought Pia happiness. To celebrate this story, young men and women toss balls (nem con) each year from the third day of Tet until the end of the first lunar month.

Players gather on a level field where villagers have planted a tall bamboo tree. A bamboo ring about 30-40 cm in diameter hangs from the tree. Gaudy fabric covers the balls, which the makers have stuffed with rice grains (representing food) and cotton seeds (clothing) along with their hidden desires. A multicoloured tassel decorates the balls.

According to tradition, before playing, the Tay people first prepare a tray of food, which they take to the field and offer to the Sky and Earth. Two balls and a bamboo ring on the tray represent vitality and virtue. The festival leader, who must have high status, prays to the Sky and Earth lo brings rain so that the community will have a good harvest. After this ceremony, the leader tosses the two balls high into the air. Everyone competes to catch them, signaling the beginning of festivities.

At that point, each family may throw its own household ball through the bamboo ring for good luck. Naturally, some balls do not make it through on the first try. The owners may try over and over until they are successful.

The festival leader closes with a prayer for a good planting season, then slashes the ball open and distributes seeds to everyone. These seeds bring good luck and will sprout quickly because they unite the forces of am and duong (yin and yang) in the warmth of women's and men's hands. Everyone receives the holy seeds of the Sky, the Earth and Humanity with the belief and hope that their crops will increase, people will prosper and the entire village will have sufficient food, clothing and happiness. For this reason, the ball game is a major feature of Tay tradition. 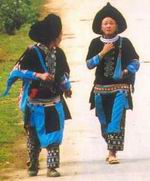 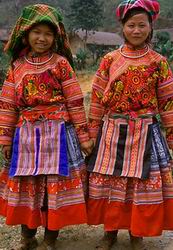