Hanoi, the capital of Vietnam, is located at 20 25' latitude North and 105 30' longitude East in the plains of North Vietnam, where there are many rivers flowing Eastwards to the sea. This is a convenient transport cluster for all the Northern provinces.
Covering an area of more than 900 km Hanoi comprises two kinds of topographical features: the delta and the Middle Region of Bac Bo. Most of the deltaic land lies on both sides of the Red River and its tributaries (Duong, Day rivers, etc.). The Middle Region part comprises Soc Son district and a portion of Dong Anh district, prolongation of the Tam Dao mountainous mass. Stretching towards the Delta; it is 7-10 m or sometimes even hundreds of meters above the sea level. That is why, Hanoi topography has an inclination in the direction North-South (from Soc Son - Dong Anh to Thanh Tri) 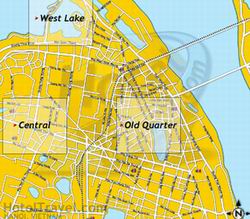 Hanoi lies at the centre of the triangular basin of the Red River. 50 km from Hanoi to the North, lies the tourist site of Tam Dao, and at the same distance to the South-West is Ba Vi. In Hanoi region, the chain of Soc Son (Soc Mount).is a prolongation of the mountainous mass of Tam Dao, which culminates at a height of 308m. This chain has different appellations: Ma Mount, or Temple (Den) Mount (because there is a temple on the summit of the mountain, called Den Soc, at the place of which Giong Genius was deified, rising to the sky on his iron horse), or Ve Linh Mount. Soc Mount is situated in the commune of Phu Linh, Soc Son district. Besides, Hanoi has other hills and mountains rising above the flat ground: Sai Mount (Thuy Lam commune, Dong Anh district) Phuc Tuong Mount (Co Bi commune, Gia Lam district) and at the centre of Hanoi, above the area of the old Botanical Garden stands the Nung Mount, also called Long Do or Khan Mount, giving more picturesqueness to the configuration of Thang Long.

Many rivers flow through Hanoi. At first, there is the 1,183 km long Red River taking its course from Van Nam JOEL (China). Its section flowing through Hanoi from Dong Anh district to Thanh Tri district is 40 km long. The Duong the second largest river in Hanoi separates itself from the Red River at Xuan Canh (Xuan Canh commune, Dong Anh) then flows through the Ngoc Thuy, Yen Thuong communes, cuts the National Highway IA at the Duong Bridge, and through the territory of Gia Lam for 17 km, before running to the territory of Ha Bac province to empty itself into the Thai Binh Binh River. Besides these two rivers, Hanoi has many other waterways, which, although smaller and shorter, are connected with the long-standing history of Hanoi, for instance, the To Lich River has linked to the development of Hanoi for 1,500 years; its junction with the Red River (at the beginning of Cho Gao Street) being filled in at the end of the last century, there only exists the section flowing between the two streets, Thuy Khue - Hoang Hoa Tham and the Buoi market aurning to the South direction under the Giay Bridge, it runs through Nga Tu So towards the Buou